The Murnong or Yam Daisy is a species of tuberous plants that were once spread across south-eastern Australia. One could not go a few yards without seeing one, with the large, potato-like tuber becoming the key food in many Aboriginal People's diets prior to colonization.

Murnong plants were consumed in large quantities by Aboriginal Australians prior to the British colonization of the continent, with the murnong playing a significant role in feeding communities across many parts of the country.

The history we have of the plant comes from written accounts from European explorers and colonizers. In 1841, George Augustus Robinson said:

"Today the native women were spread out over the plain as far as I could see them, collecting punimim, murrnong, a privilege they would not be permitted except under my protection. I inspected their bags and baskets on their return and each had a load as much as they could carry. They burn the grass, the better to see those roots but this burning is a fault charged against them by squatters."

As early as 1803, European accounts detailed the murnong as an important food for Aboriginal People, with imagery of a hilly landscape dotted with them like a field with dandelions. 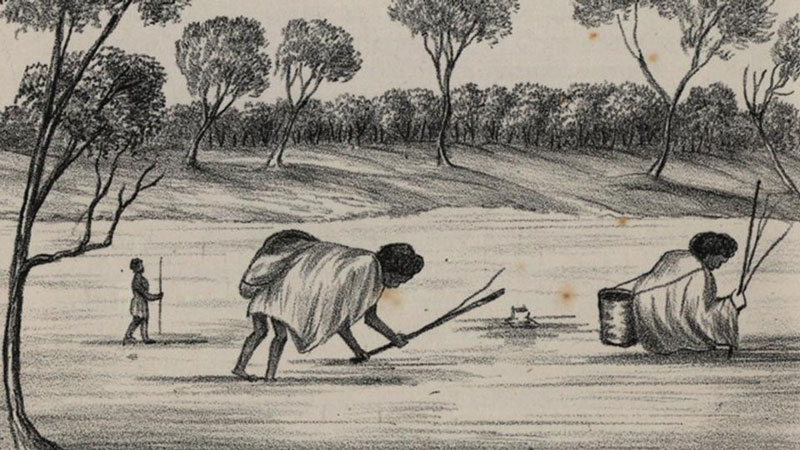 From widespread, to endangered

South-eastern Australia became a major grazing area for Europeans looking to find economic oppurtunities in Australia. From Adelaide, right up to Sydney and beyong, the dense grazing of sheep and cattle caused irreversable loss of murnongs across the country.
The heavy animals compacted the soil making it difficult for native vegetation to seed naturally. Surveyor-General of the colony of New South Wales, Major Thomas Mitchell noted that " the cattle are very fond of the leaves of this plant, and seem to thrive upon it ".
Sheep caused the most damage to the murnong's population. In regions where sheep were introduced, the murnong were more plentiful. Sheep quickly learned to uproot the tuber of the murnong with their nose causing even more severe depopulation.
The impact on the Aboriginal People who lived in these areas at the time was disastrous. The Taungurong People (north of Melbourne) had been pushed off their land with the over-grazing causing the supply of murnong and other native plants to greatly diminish. The people were so hungry that they would ' part with anything for a trifle to eat or drink '.
It's loss across the country broke the link for many Aborigional People during the colonization of the continent, and caused thousands of people to starve. This includes all Nations of the Kulin Nation, and neighbouring Countries that span most of south-eastern Australia.
"Mr Munro said there were millions of murnong or yam, all over the plain and that the kangaroos were so abundant that they came up to the door of their tents on one occasion and knocked down a child. Emue were also abundant and came near their tents. This was only 18 months ago; now there are none seen. "
Today, the Murnong is found in isolated pockets of Eucalypt woodlands, and it's difficult to find in the wild. If found, please don't harvest and their populations need to recover. Instead, grow your own and help bring them back across the region where they were once plentiful.

Use premium, high-grade potting mix. Water the tube your murnong arrives in before transferring. Do not break the soil around the roots. Transplant the murnong by squeezing the tube at the bottom, and the top, on all four sides.

Do not pull the plant by the leaves, instead flip upside down and wait for it to slide out by squeezing the tube.

Ideal pot size is between 140mm and 300mm. Anything smaller or larger can cause issues.

After planting, water generously with a seaweed solution or liquid compost.

Dig a hole the same size as the tube your murnong arrives in. Break up the soil at the base of the planting hole. Mix in compost and slow releasing native plant fertilizer. Ensure the soil level of the plant is slightly higher than the ground to allow for sinkage. Water well with liquid compost or seaweed.

Planting from seed
A murnong plant alone is expensive if you don't use it's seeds to grow new, delicious tubers.

We recommend not to harvest your first murnong for the first 2 years, and instead use it as a mother plant to grow more. We've turned 3 murnong plants into 300!

Sow the seeds of the murnong plant in March/April. Fertilizing at this stage with a phosphorus rich fertilizer leads to larger tubers (in line with Aboriginal burning and nutrient-cycle practises).

Uprooting the tubers and seperating them and replanting is far more successful that seed-sown planting which has low germination rates, but it carries its own risks.

Murnongs prefer daily watering during period of warm weather, and reduced watering in cooler times. Daily watering when conditions are dry, and if in a terracotta pot, be mindful of soil dampness at all times as the clay pulls moisture from the soil.

Murnongs are best harvested after 2+ years when the tubers mature. Younger tubers are less fiberous but are much smaller.

To harvest, gently wiggle the leaves and uproot the tuber. Clean the murnong's tuber well before eating. Use the leaves in salads, or as a green vegetable.

The white tubers are nutritious and sweet tasting. They can be eaten raw or baked, mixed with other vegetables or turned into a paste for desserts.

Unlike most natives, using a phosphorus based fertilizer yields larger tubers. Fertilize monthly with a seaweed solution for plant health.

Aboriginal People would cycle nutrients using fire which pulled carbon from dead and dry plants and put this back into the soil for plants like the murnong.

This cyclical nature has lead to the murnong being best adapted to phosphorus based fertilizers.

Getting Started with Your Melbourne Bushfood Plant